I'd been wanting to add some features to PowerView for a while, it's arguably the tool I use most on infrastructure assessments, and when @harmj0y officially discontinued PowerSploit I decided to fork it and start adding them.

For anyone that doesn't know, PowerView is an amazing tool written in PowerShell that can be used for playing with Active Directory and particually performing recon of Active Directory.

This post is about some new features I've added to it. My forked version can be found here.

Until now dealing with RBCD (or the msds-allowedtoactonbehalfofotheridentity attribute) using PowerView was a manual process. Using Security.AccessControl.RawSecurityDescriptor with an security descriptor definition language (SDDL) string as an argument and manually converting it, as documented here and here.

Get-DomainRBCD by default finds all accounts, user and computer, that have the msds-allowedtoactonbehalfofotheridentity. It returns a custom PS object where the SID's have been resolved if possible. If identities are specified then only the RBCD configuration of those identities are returned: 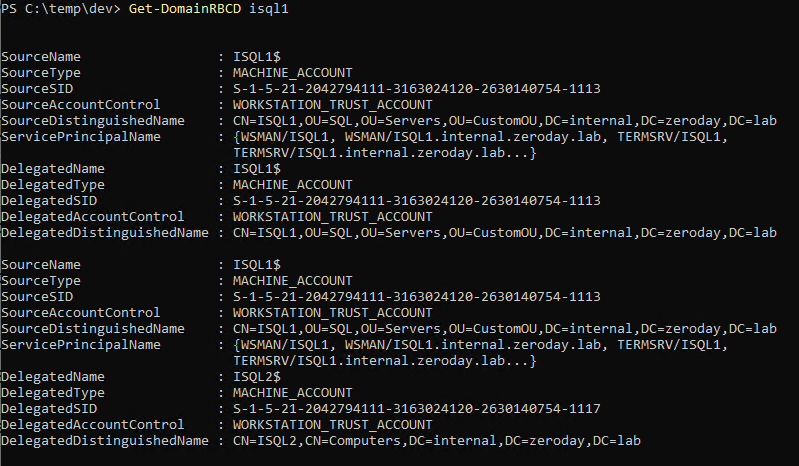 It also tells you whether the account (either source account or account that's been granted delegation rights) is a user or machine account. This is useful to know because only 1 type of account can be configured on the msds-allowedtoactonbehalfofotheridentity security descriptor at once. So either all computer accounts or all user accounts, but a mixture of the 2.

The Identity parameter is the account(s) where RBCD is to be configured, it can be done on multiple accounts at once and works the same way as in the other PowerView functions, like Get-DomainUser. The DelegateFrom parameter is a pipe ('|') delimited list of identities to delegate access to. The argument to DelegateFrom can be any format also supported by the Identity parameter:

Configuring RBCD the same as in the previous screenshot can be done like this:

Here, I configure RBCD on the computer account ISQL1 and delegate access to ISQL1 and ISQL2. This results in the same configured shown previously: 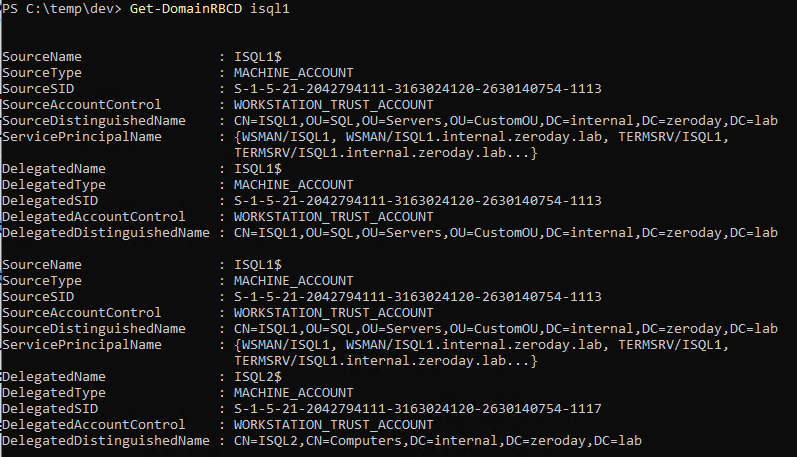 Finally, it is possible to easily remove this configuration using the -Clear switch to Set-DomainRBCD:

This makes dealing with RBCD using only PowerView much easier.

A small addition to the Get-DomainUser function in PowerView was the -Owner switch. With this switch it return 2 extra object members, OwnerSID and OwnerName:

While coding Set-DomainRBCD I realised that the msds-allowedtoactonbehalfofotheridentity attribute is just a security descriptor (SD) and it reminded me of a conversation I had in the BloodHound slack regarding the AdminCount attribute.

It is often required to escalate accounts during assessments to perform certain attack paths, but it is always best to leave the client infrastructure in as similar state as before the assessment. So a method of viewing and restoring object SD's was required.

Get-DomainObjectSD can be used to retrieve an object's SD. By default it will output a custom PS object with 2 members (ObjectSID and ObjectSDDL).

There is also an -OutFile parameter that can be used to output the SD's and SID's to a file:

The -OutFile argument appends when the file exists so different SD's can be added dynamically: 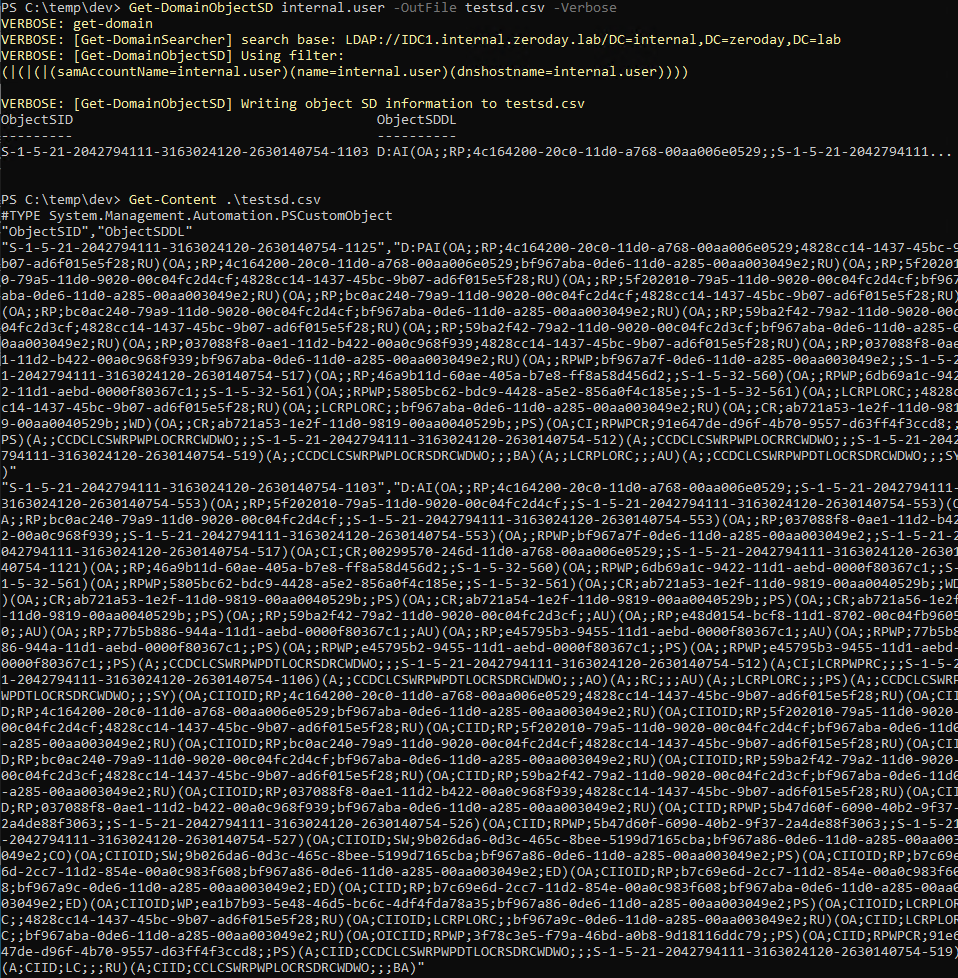 It is also possible to retrieve several SD's at the same time, by piping the identities into Get-DomainObjectSD, like with other PowerView functions: 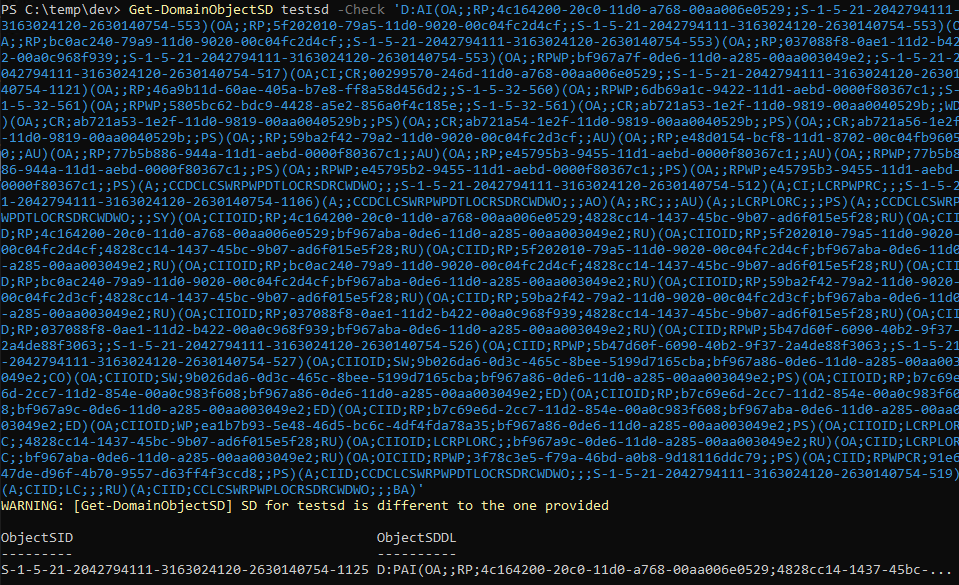 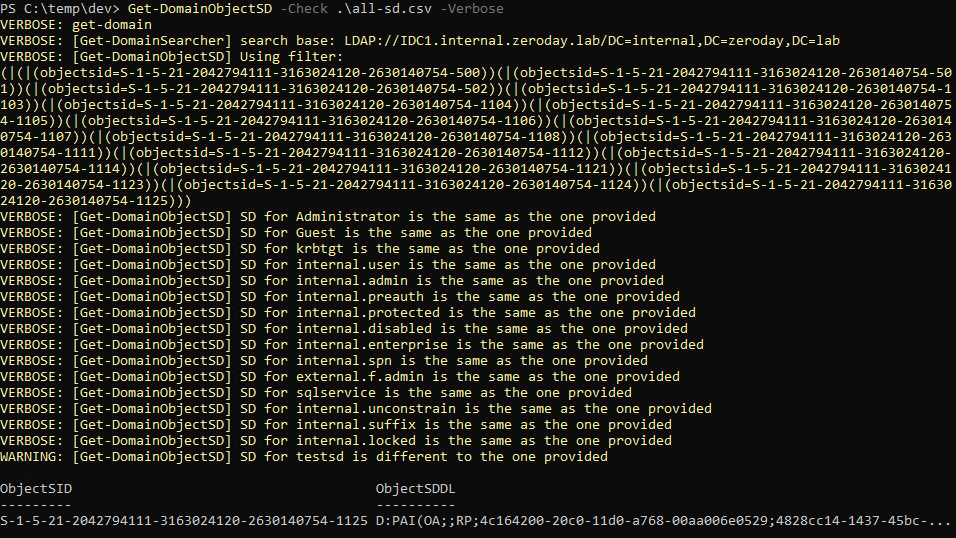 So after adding the testsd user to the Domain Admins group, the AdminCount attribute was set as expected:

After a while and retreiving the SD using Get-DomainObjectSD function and diffing the 2 SD's shows that they are significantly different:

Removing testsd from the Domain Admins group, leaves the AdminCount set to 1, as shown below:

There are 2 ways to set object SD's with Set-DomainObjectSD, firstly using an input file with the -InputFile parameter, this takes a csv file in the same format created by Get-DomainObjectSD: 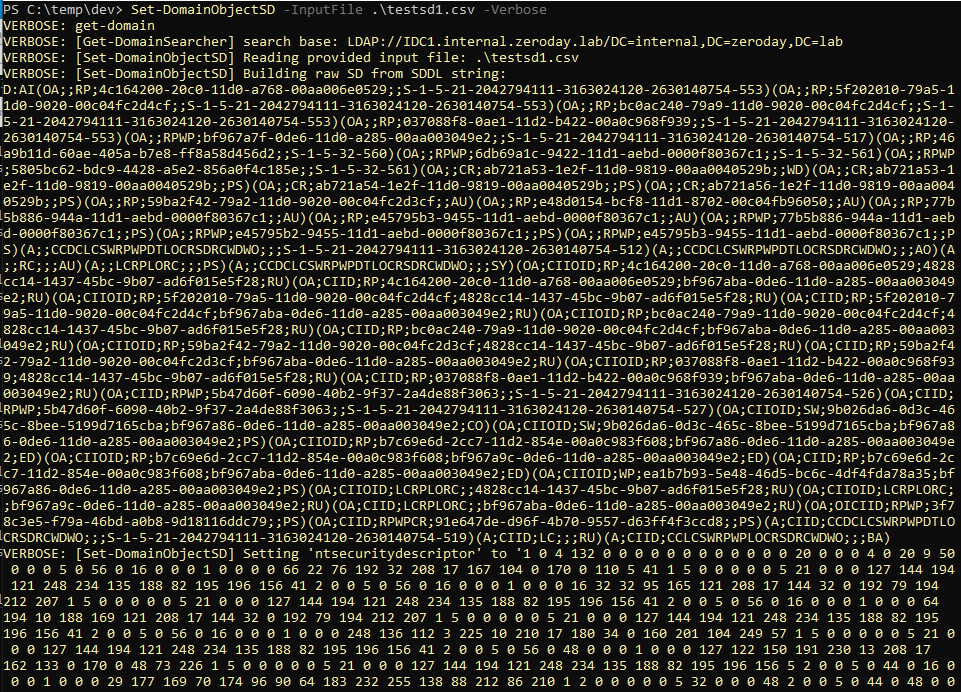 This will apply all SD's contained within the provided file. The other way is to specify the object identity and the SDDL string manually with -SDDLString: 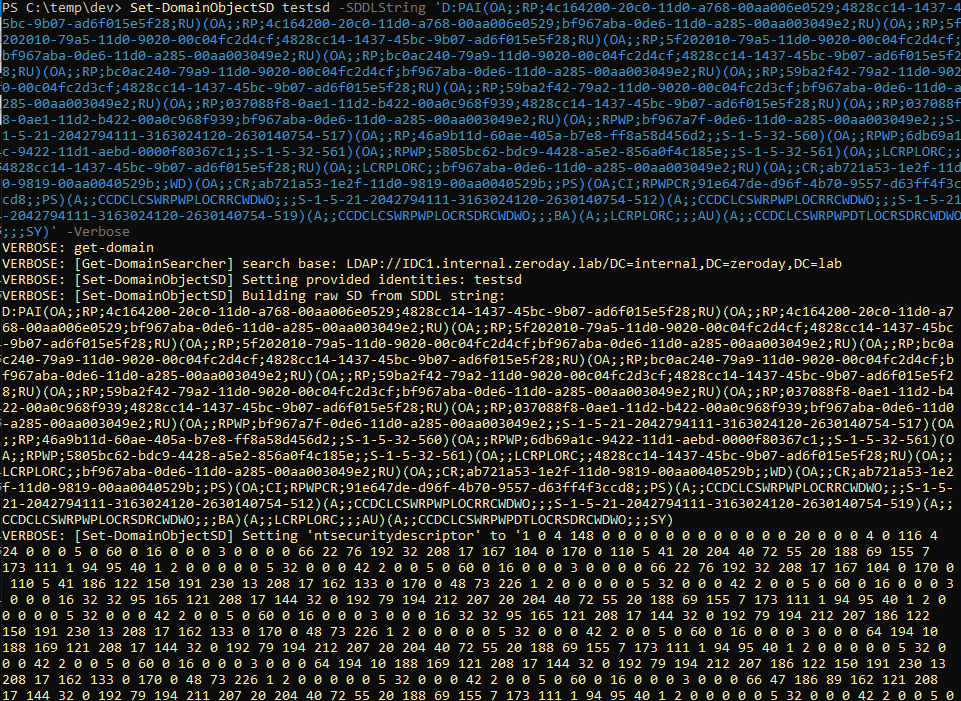 If multiple identities are specified here, the same SD will be applied to them, unlike if an input file is provided.

Some Other Useful Features

As mentioned above, the AdminCount attribute remains even after the user has been removed from the protected group. I wanted a way to find all current members of these groups. For this I created Find-HighValueAccounts, by default it returned the full user and computer objects (I've selected just the samaccountname so it can be displayed better):

It gets group membership recursively. You can specify which type of object to return with the -Users and -Computers switches. It also supports -SPN for returning accounts with service principal names, -Enabled and -Disabled, -AllowDelegation and -DisallowDelegation; and -PassNotExpire to search for accounts that are configured to not require a regular password reset.

Another useful function I created is Get-DomainDCSync which gets the ACL from the domain head, and determines which result in the ability to perform a DCSync. This is primarily 2 different types of ACE's, GenericAll or both DS-Replication-Get-Changes and DS-Replication-Get-Changes-All. This function again returns the full object and by default returns user and computer objects:

I've also added a few features to some standard PowerView functions, including Get-DomainUser. 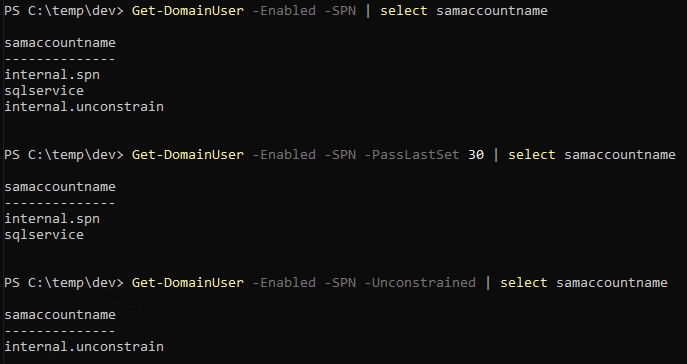 For Get-DomainComputer I've added 2 switches, -RBCD and -ExcludeDCs. The -RBCD switch which returns computer accounts that have a non empty msds-allowedtoactonbehalfofotheridentity attribute. -ExcludeDCs allows you to filter out domain controllers from the results, useful for searching for computer accounts configured for unconstrained delegation:

I do plan on making more additions to PowerView but hopefully these will be useful on assessments.

Until then you can grab my fork of PowerView here.