Hacking Android is a huge topic, you have the Linux kernel, native code applications and normal Android applications that run on top of the Dalvik VM, a huge attack surface with the wireless, bluetooth, USB, NFC and various other interfaces.

This post is going to be a very short introduction to the platform as well as introducing some very basic analysis techniques for analyzing an Android application.

For this post I will be using a HTC Desire HD running an unrooted Android 2.3.5, this is an old version of Android, running on an old device but it will be fine for the purposes of this post.

The host machine that I'll be using is running 64bit Gentoo running the Linux kernel version 4.0.5.

The first thing you need to do if you want to analyze an Android device is to install the SDK.

Depending on your system, you might need to install both the Android Studio as well as the platform tools, its important that you have the platform-tools directory because that is the directory that contains the adb binary.

adb is the Android Debug Bridge and it's used to do any sort of debugging of any android device. Without this application, debugging Android will be very difficult.

On my Windows computer this was installed to C:\Users\User\AppData\Local\Android\sdk\platform-tools.

Where ever it is installed to, it's best to include this directory in your PATH variable so that you can run it with cd'ing to that directory or having to put the whole file path in every time.

This is optional but on Linux I've been unable to get adb to work with running it as root, instead of having to use sudo all the time I set the permissions to the adb binary to 4750 and the ownership to root:wheel, this makes it a setuid binary and so will run with root permissions but only for users in the wheel group.

The permissions look as follows:

Firstly the Android device needs to be connected to the host machine using USB.

After that we need to enable USB debugging, on my test device the setting is in Settings->Applications->Development: 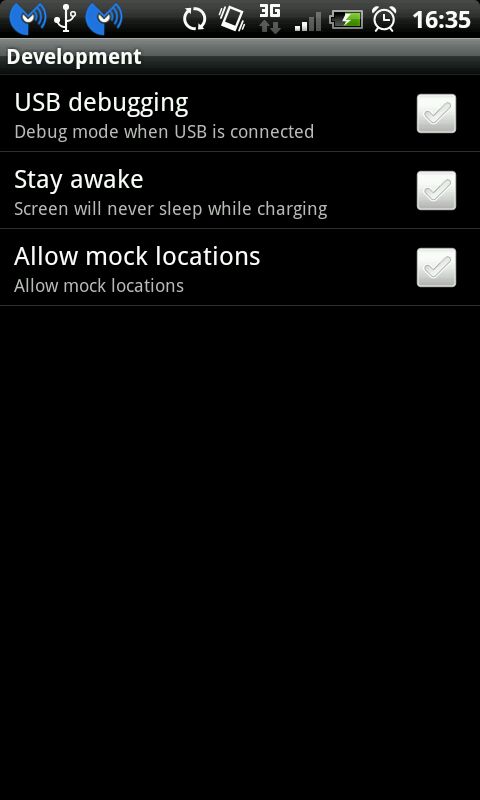 You will need to confirm this: 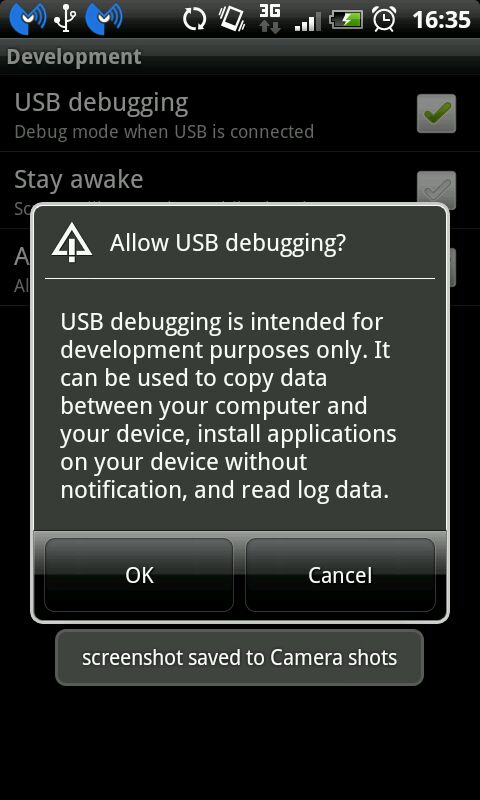 We can now use adb to get a shell on the Android device and take a look around, first let's check the version of the Linux kernel that it's running:

So as you can see it is, in fact, running Linux version 2.6.35 but in some sort of restricted environment.

Let's check to see some details of the user that we have been logged in as:

As you can see due to the restricted environment, the normal methods aren't working.

But there is an easy way to figure this out:

So that didn't work either, but there is a way to use grep on the output of these commands:

Here we can see we're running at the user shell. Also note that we can run the commands using adb but then pipe the output to applications running on our host system to sort through the data.

Knowing our username we can now see what shell we are running in:

So this is clearly a Linux system but its very different from most Linux systems, let's have a look at the directories under /:

Again, some of these are familiar (like etc, proc, dev...) but directories like system, acct and app-cache are less familiar.

I'm not going to go through the whole of Android, the point of this section was to demonstrate that this is a Linux system but not 1 that will seem totally familiar with Linux admins.

There are, however, a couple of commands I want to mention here, firstly getprop:

Here I'm just using getprop to show some information about the build version of Android but you can get a lot of information from this.

The other 1 is logcat, which is basically the system log:

Here I'm just outputing the last 8 lines of the log, as you can see it's an actual built in command into adb, but you can run logcat from inside the shell too.

logcat is very useful for debugging and well as showing some information disclosure vulnerabilities that might exist in an Android application, but we'll get to that a bit later :-)

Installing And Running The Challenge App

For the purposes of this post I created a little, very basic, challenge application, which you can download from here.

You can install the application using adb:

Now that the application is installed we can run it and have a look at what it does.

Starting the application shows us this: 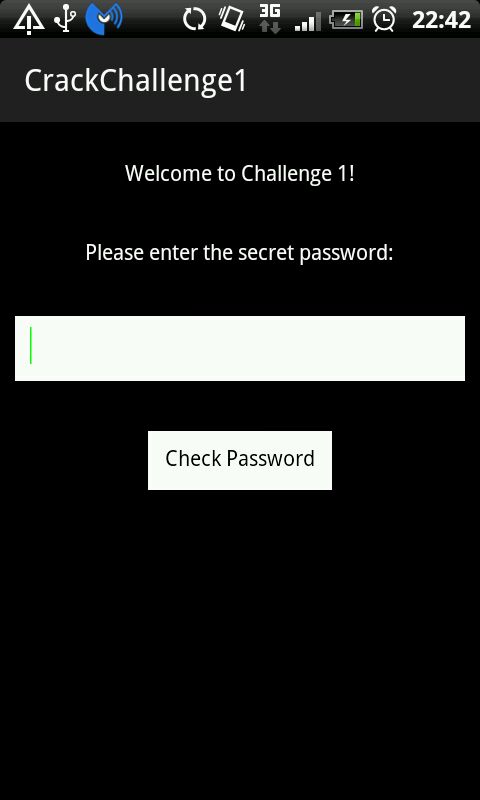 Putting in some text in to the field and clicking on the Check Password button shows us this: 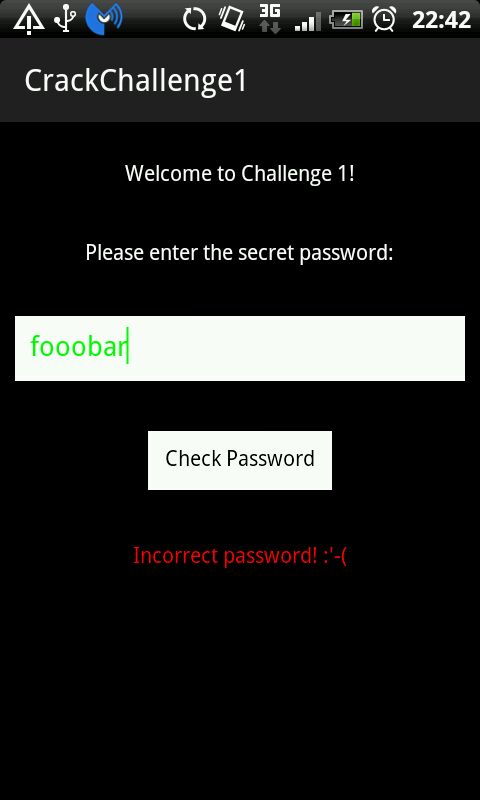 So its clear what we have to try and do here.

These are very similar to zip files and can be unzipped using the unzip utility:

As you will see there are a lot of files in res/, I've shortened it here.

One of the most important files is AndroidManifest.xml, this contains the configuration of the application, including activity, intent and permissions declarations.

But as you can see this is some sort of binary file:

We can manually convert this to plain XML using something like AXMLPrinter2 but I'll show an easier way to look at this later.

Another important file is the classes.dex file. This contains all of our Java code.

Most code that runs on Android applications, including most of the Android Framework, is Java, but instead of compiling to Java bytecode, it is compiled into Dalvik bytecode (and stored in .dex or .odex files).

Again, this could be manually decompiled back to Java using dex2jar and looked at using jd-gui but I'll show a better way of doing this too.

To end this post I'll crack this challenge while demonstrating a quick basic analysis of the apk file using a tool called androguard created by Anthony Desnos.

Androguard is a python toolset for analyzing apk files.

Its very easy to setup, providing you have python and git installed you just run:

This will create a directory in the current directory called androguard.

Now you just need to make sure you have the latest version of IPython installed, you can do that by running:

Now just cd to the androguard directory and you should see the following (or something very similar):

The tool we'll be using is androlyze.py, we can start it by running:

Now we need to import our apk file:

Here we are using the dad decompiler, created by Geoffroy Gueguen, that comes with androguard and selecting the challenge apk file.

Now we can look at this application in more detail:

As you can see this is a very basic application, but we can now see the contents of the AndroidManifest.xml file.

An activity is basically just a screen, or, to relate it to a web application, a page. The main activity is the first activity that is shown to the user.

Let's try to look at some of the code.

First we'll print the different methods which are part of the main activity:

The first place to look here is the onCreate method.

This is the code that gets run when the application first starts:

We can see here that the actual interface for this application is created dynamically using Java.

As you can see from line 20, this main class is registered as the onClickListener for the button that checks the value of the password.

This means that when you press the Check Password button, it will run the onClick method in this class.

So let's look at the code for that method:

So here it's obvious that the password is supersecurepassword.

We can check that on the application itself: 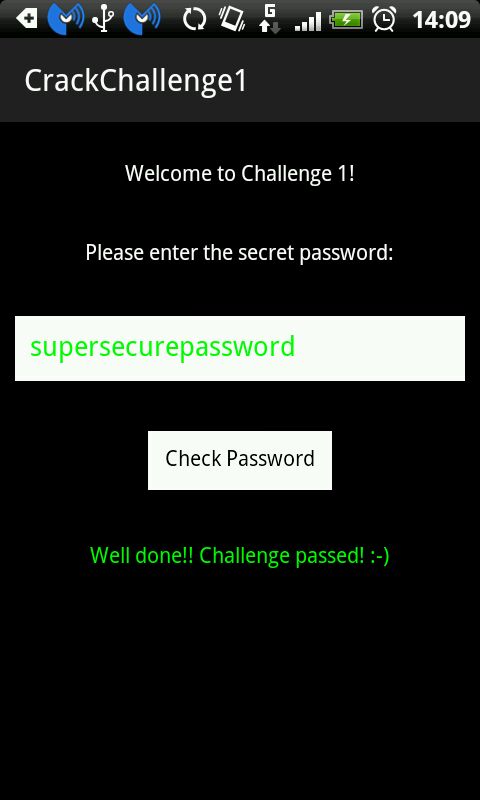 It was fine this time but there are times when a decompilation will not be enough, the decompiler will not be able to recreate the source code well enough to get the right result.

In these cases you can use the disassembler like this:

Here we can see the actual dalvik disassembly and decompile it ourself if need be.

So we've learnt a bit about Android and how we can begin to analyze the system more.

We have been introduced to the basic layout of Android and Android applications, as well as a few tools that can be used to look a little closer at them.

Hopefully this blog post has done a decent job of introducing the basics of Android and given ideas for further exploration.