So it's been a long time since I've blogged anything but I've finally ported my blog from Octopress and am now in a better position to update it.

For a while now I've been focusing on learning as much as possible about perfomring infrastructure security assessments and particularly Active Directory (AD), so it makes sense to start creating some blog posts regarding that.

AD is a highly complex database used to protect the rest of the infrastructure by providing methods to restrict access to rsources and segregate resources from each other. However, partly due to it's complexity and partly due to backwards compatibility, it's very common for insecure configurations to be in place on corporate networks. Due to this and the fact that it is usually used to provide access to huge sections of the infrastructure, it's a high value target to attack.

In this post, I'll demonstrate some basic reconnaissence that might be possible from a completely unauthenticated position on the infrastructure.

The lab configuration is simple, as shown below: 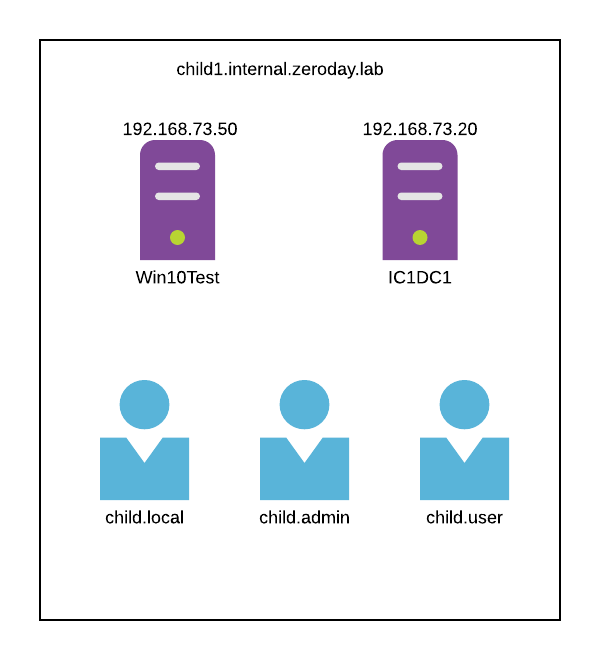 The first step would be to perform a port scan of the target system. Nmap is a common choice for a port scan and for good reason, Nmap has tons of options and is capable of much more than simple port scanning.

A basic port scan using Nmap of the top 1000 TCP ports is shown:

As shoiwn above, a bunch of ports are open on the target domain controller, these can be further probed using the -sV option:

This is known as a service scan and attempts to probe the listening service and return a reliable software name and version.

As we can see Lightweight Directory Access Protocol (LDAP) is listening on a number of ports. That is an indication that this system is a domain controller.

Along with LDAP, the port scan showed that this system was listening on UDP port 53, this is almost certainly Domain Name System (DNS). DNS can be queried to determine the domain controllers for a particular domain:

It can also be used to query the root domain's domain controllers:

Server Message Block (SMB) can be really useful for attackers, there are many possible attacks against the service. Here I'll only perform some very basic enumeration.

First it's useful to know whether NULL authentication is permitted. A Metasploit module can be used to test for this:

So we can access SMB pipes without requiring a username and password. While this isn't that common these days on domain controllers, I have seen this on some corporate networks.

We should also try enumerating users. Another Metasploit module can be used for this:

Now that we have a list of valid usernames, it's worth trying to guess a valid password. Password spraying is a method of attack where you take a list of valid, or potentially valid, usernames and attempt to try different commonly used passwords across all usernames.

The lab environment is small but in a real world AD infrastructure it's very likely to be able to guess passwords for some accounts. Of course on a real infrastrcture extreme care has to be taken before attempting to perform password spraying attacks as there is a real possibilty of locking user accounts.

To perform a password spray CrackMapExec can be used:

The password for the child.user account was discovered in this password spray attempt. Now recon from an authenticated point of view is possible on this domain.

AD security is a huge topic and I've only began the scrath the surface in this post, even from an unauthenticated point of view. Hopefully this was a half decent way to introduce the topic though.

It's worth noting that there are many toold that perform the same tests carried out in this post, but some of them did not work. I might make a post demonstrating that because it's important to understand that different tools will work in different situations, so it's very useful to have knowledge of many and try others when your first choice fails.

If you are serious about AD security, the best resource out there is adscurity.org by Sean Metcalf.